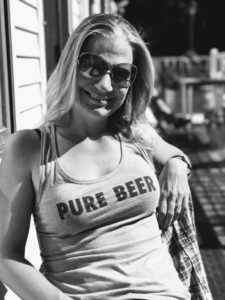 Hoppytrips was founded by Verena out of a lifelong passion for traveling, meeting new people and, of course, drinking beer.

She started collecting beer bottles around age 16 (the legal drinking age in her native Austria) and has had a passion for it ever since.

She first started working as a tour guide while studying Communications, Anthropology and Development Studies and later worked on river cruise ships – beer tastings in Bavaria and visits to breweries such as the Weltenburg abbey included.

After years of working in the Austrian Foreign Service, which also brought her to New York, she went back to working in the hospitality industry, worked at Eleven Madison Park and is now giving beer & food tours in New York as a licensed NYC tour guide. She’s also working in a beer garden and recently helped open a dog-friendly, popup beer garden called Barkeasy.

She’s trying to keep the beer weight off by running (anything from 5ks to marathons), hiking, biking and whatever else is fun.

Her other big passion is animals, and here, especially her dog, Truffle, who she rescued 9 years ago. Together with her husband Andreas, the 3 live in Brooklyn.

You can reach her at cheers@hoppytrips.com!